“Heart of Oak are our ships, jolly tars are our men, we are always ready; Steady, boys, steady, We’ll fight and we’ll conquer again and again”…so goes the chorus of Heart of Oak, the official march of the Royal Navy, Royal Marines, and several Commonwealth navies [Youtube rendition here]. The oldest ship on this new shipsearcher page – Royal Navy Surface Units – Current and Retired – is the HMS Victory. 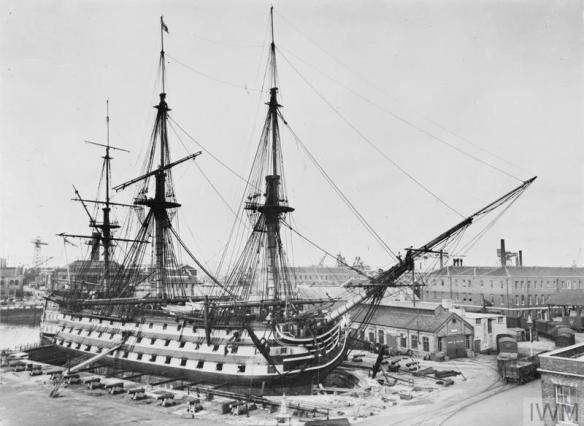 This first-rate line of battle ship was being built when Heart of Oak first appeared on the London scene to commemorate the victories of 1759. Our Royal Navy page starts with Victory and spans 260 years to the newly commissioned and largest-ever British carrier, HMS Queen Elizabeth.

Another unique feature of this page is the use of the Kent County Council Archives historical aerial mosaic photos (provided to Google Earth), which allow for Second World War-era captures of ships in Chatham Royal Dockyard. These views make ship identification of famous RN ship classes, such as County Class Cruisers, and aircraft carriers possible. For the first time, we also have a category for monitors, which during the first half of the twentieth century were tubby, short vessels that mounted a few battleship-sized guns! As always, we hope you appreciate the listing, and would be happy to hear about issues with any identification: help us identify our views of unknown ships! 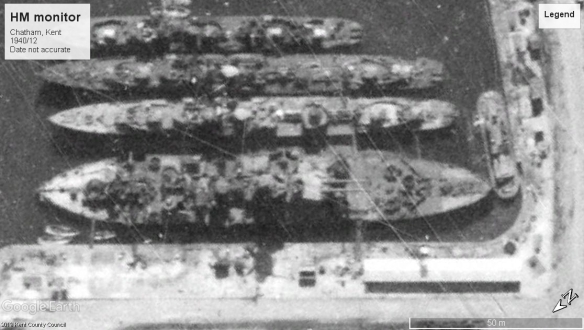 With Spring comes the budding out of blossoms, and bright hues to succeed the drabness of a long Ottawa winter. At the Canadian Aviation and Space Museum, the German First World War Fokker DVII biplane is wearing a new motley coat of distinctive camouflage. 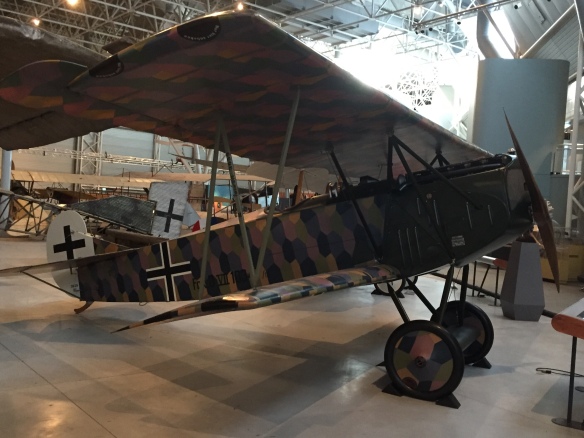 To revisit some relevant posts, the only other complete Fokker DVII in Canada is at the Brome County Historical Society in Knowlton QC. That aircraft is in 4-colour lozenge camo, (called “Knowlton” pattern or Vierfarbiger), while this Fokker wears a 5-colour (“Canberra” or Fünffarbiger) scheme. The CASM now has the AEG German bomber in night lozenge camouflage, this Fokker in daytime lozenge, and the Junkers J1 in junky lozenge!

(editor’s note – the contributing author of this piece thought a lozenge camo joke was appropriate here, despite the editorial board’s recommendation otherwise) 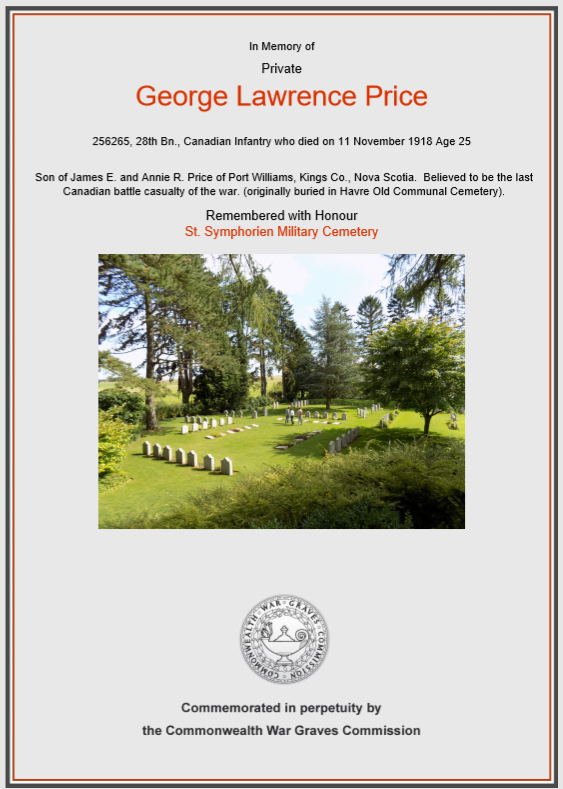 Pvt. George Price, “A” Company, 28th Canadian Infantry Battalion (Northwest) is reported as the last CEF soldier to die before the 11AM Armistice that ended the First World War. Units of the Canadian Expeditionary Force had been ordered to resume the advance, and keep pushing German forces beyond Mons, Belgium. By mid-morning most soldiers knew of the Armistice coming into effect at 11. The 28th Battalions “A” and “B” Companies were pursuing a retreating enemy East of Mons, through the woods and village of Havré. George Price, a 25 year old originally from Kings County, NS, who had been working in Saskatchewan, had just crossed the canal into Ville-sur-Haine. While other units were standing-to, his small team were working their way into the village, with Germans units withdrawing to the North-East. Pvt. Price was struck in the chest by a rifle or machine-gun bullet. Help from his comrades and Belgian civilians could not save him. At his death, church bells in Mons and the surrounding villages were ringing out in celebration of the end of hostilities.

The Commonwealth War Graves Commission’s site shows that, although Price was the only CEF soldier killed-in-action advancing in Belgium that day, 38 others, and one soldier from the Dominion of Newfoundland, died at various locations in France, Britain and Canada, on this last day of the Great War. Here is a small selection of documents that help tell the story of Price and the events of a hundred years ago:

On this centenary of the first day of the Amiens Offensive (8-12 August 1918), I focus on 15 cm Howitzer no. 813, captured by the 43rd Canadian Infantry Battalion (Cameron Highlanders of Canada) a hundred years ago this morning. Canadian units made astonishing gains this day, and captured thousands of enemy prisoners and a whole range of German weapons. 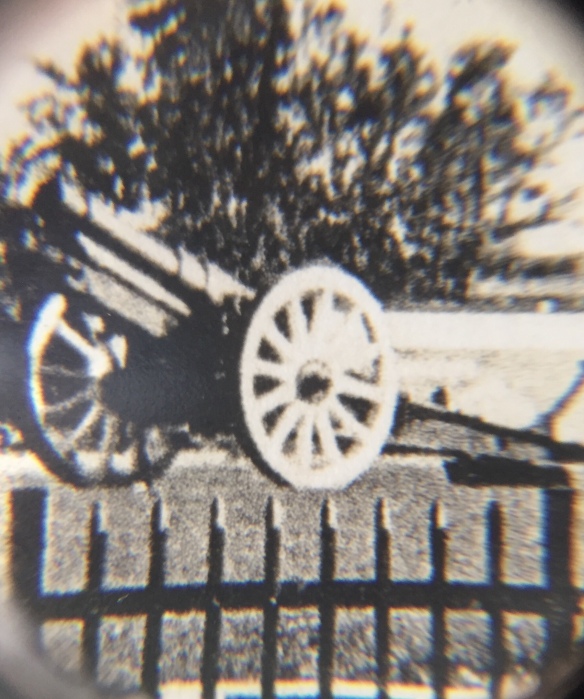 Early on the morning of the 8th, the 43rd Battalion, 9th Infantry Brigade, was making progress south-eastwards having just cleared out Dodo Wood, along the Amiens – Roye Road, south of Demuin. “C” Company was tasked with taking Hollan Wood on the right. Mk V heavy tanks of “A” Company, 5th Battalion, Tank Corps (British), lumbered alongside Canadians, providing support and attacking fortified defences. 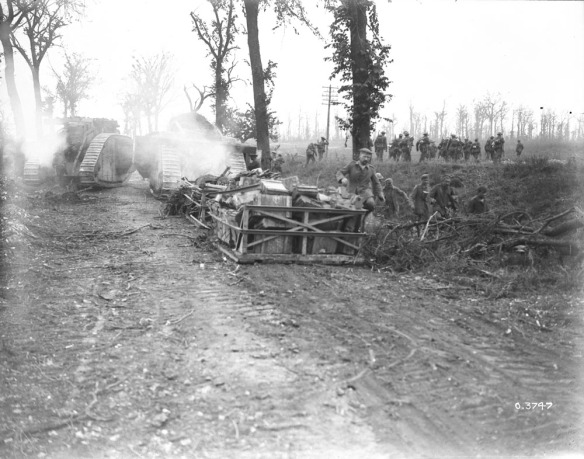 At 07:30 “D” Company pushed on over open ground towards Vignette Wood, with a major objective being the elimination of a battery of guns that were known to be sited there. 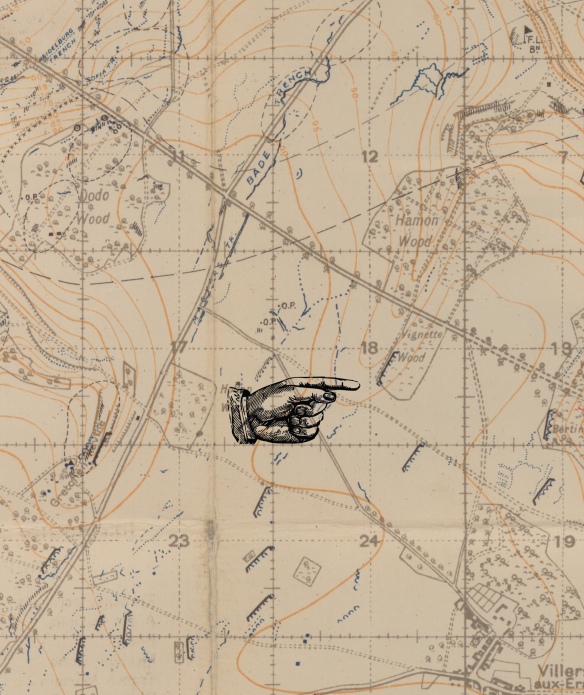 On the southern boundary of the wood, four “5.9s” (15cm howitzers) and another nearby battery of “Whiz-bangs” (77mm field guns) opened up on the advancing units. In short order the guns knocked out the British tanks. “D” company, led by Capt. J.D. Verner, M.C., managed to advance along a cut in the road, and brought the battery under accurate enfilading fire, with the gun crews promptly surrendering and the guns captured intact. The Battalion rested in Vignette Wood as the 7th Battalion came up and continued the advance. 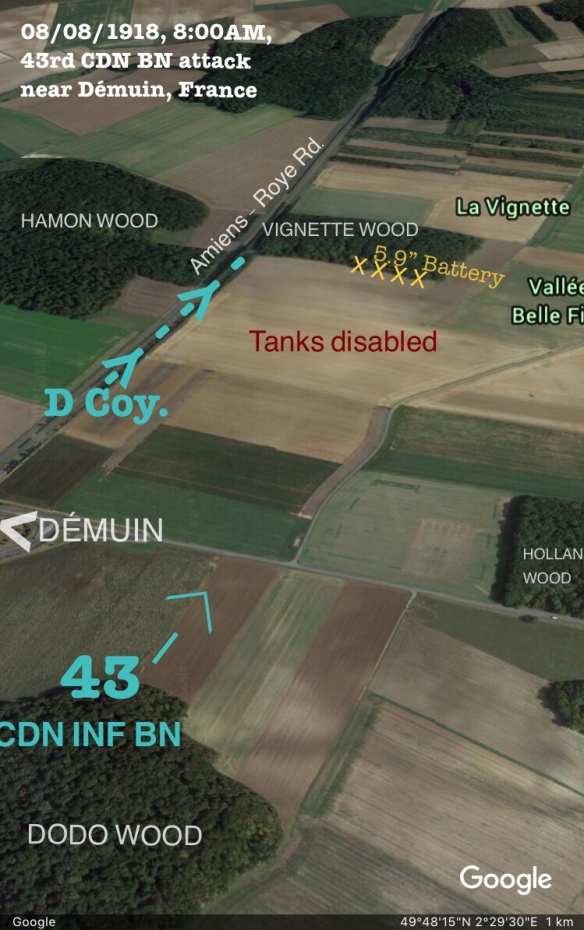 This is the much-anticipated debut of a new series of posts! The extensive Warsearcher postcard archive has been mined to restore a visual record of military artifacts that have been lost from communities across Canada. Why? Because we can’t let the non-existence of an artifact hamper our interpretation of it! 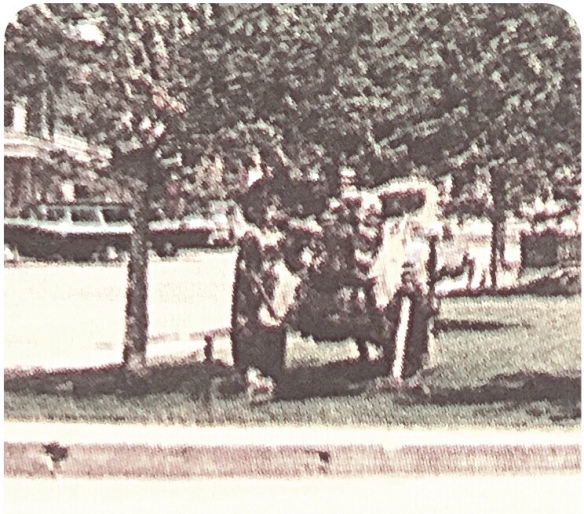 German 15 cm Howitzer no. 249 was captured by the 29th Canadian Infantry Battalion, at Station Wood, near Vimy. This gun was likely one of the four “5.9 inch” howitzers (the British name for these guns) captured by Lt. E.C. Corbett (service file hyperlinked) and a patrol of D company late in the day of 9 April 1917. This action, and accurate map references, appear in the War Diary. 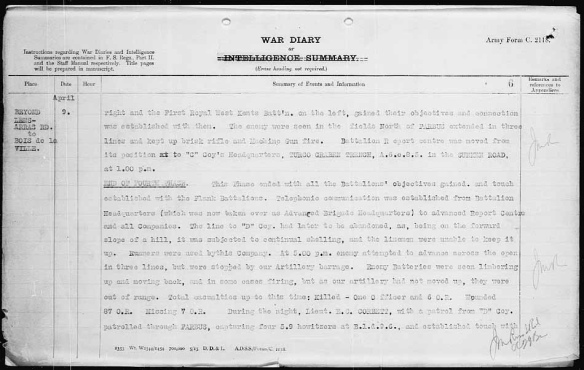 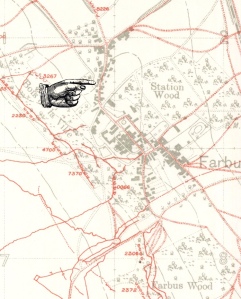 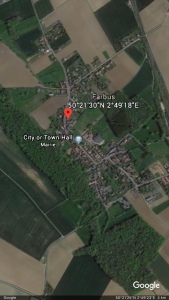 One of a vast collection of captured German trophies sent by the government to Canada, It was shipped to East Angus via Grand Trunk Railways 10 December 1920;

Here is a late 1950s postcard view of the East Angus Post Office and War Memorial, which shows what looks like the 15cm schwere Feldhaubitze model 13: 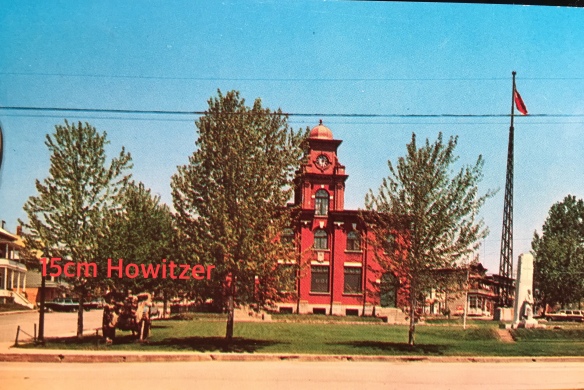 Though it seems to have survived the scrap drives of the Second World War, its later fate is unknown. Any readers with information on this trophy are welcome to comment! 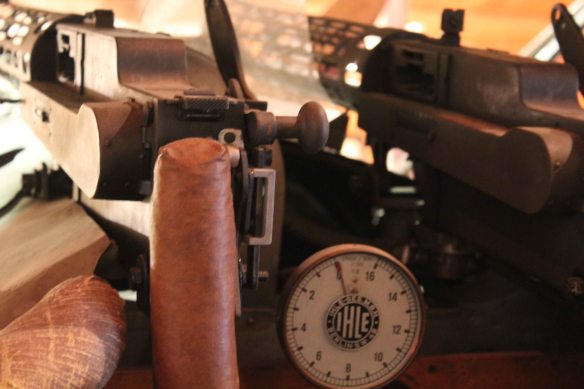 Today, the Brome County Historical Society, in Knowlton, Quebec, has one of the strongest collections of First World War military artifacts in Canada. This is largely due to the efforts of Senator George Foster, who petitioned the Dominion Archivist and Comptroller of War Trophies Arthur Doughty for a quality collection. In addition to the spectacular Fokker DVII German biplane with original fabric covering including camouflage (with a good write up about it by a BCHS member here), the BCHS has a diverse collection of German trench mortars and a range of German machine-guns. Since Sep. 2013, work with Ross Jones, the museum’s militaria specialist, has established the battlefield provenance of many of these items using the War Trophies Commission records at Library and Archives Canada. We have poked around pieces, trying to discern key numbers, and any matches have added to the number of surviving pieces in my database. Some of the trophies also have capture info painted on by hand. The range of items, from machine-gun belt fillers (which look like a pasta grinder) to trench periscopes, to aerial bombs, gives a good idea of the variety of small trophies that once accompanied many of the larger artifacts out to sites across Canada. A very significant find was had when Ross managed to man-handle the destroyed barrel of a 25cm heavy Minenwerfer trench mortar around to discover the serial number. The 102nd Canadian Infantry Battalion captured mortar no. 1524 (along with 119 German prisoners) on Vimy Ridge, April 9th, 1917. The barrel, bearing heavy shrapnel pitting and shell damage, is a powerful relic of the Vimy victory. This is only a small sample of the varied collection of the BCHS, a small museum worth a visit! 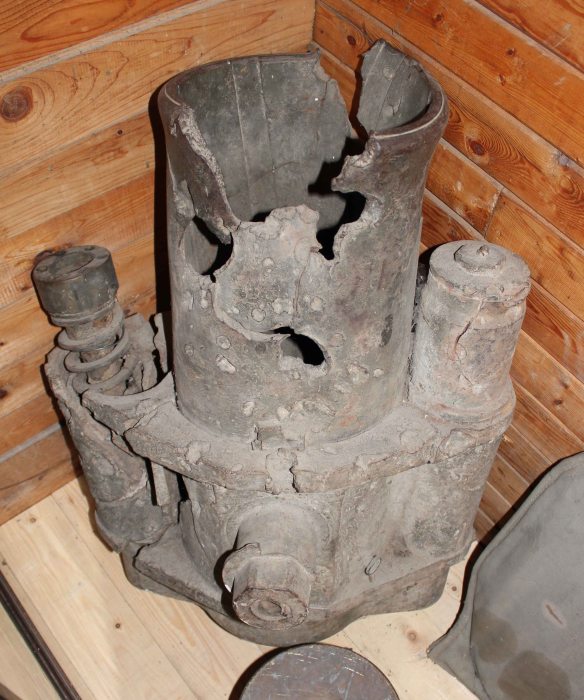