This page features some of the strongest captured First World War German artillery pieces and other war trophies I’ve come across. These will also help show the variety of weapons captured by Canadian units.

The 21 cm Mörser 1910 pattern and longer-barreled 1916 pattern were massive Krupp siege howitzers, designed to reign destruction down on heavily fortified positions.  These, along with the unique naval cannon on field carriages, were the heaviest of heavies brought back to Canada as war trophies.  They weighed about 7 long tons and could fire a bruising shell about 10 kms.  They are seen with or without tire-traction pads, shoes that helped keep the massive weight from tearing up roads and bogging the gun down.  They also sometimes had a gunner’s shield.  Photos show them captured in open batteries, in massively fortified concrete positions, and in transport mode (divided into two loads: tube and carriage) on roads.  Early in the War, the British called these guns, or the massive shells they fired, “Black Marias”.  Incredibly, Canadian authorities brought back at least 22 of these monsters from Europe.  Today, it appears only 3 guns remain.

One, originally in Hamilton, is at the Canadian War Museum, and two are in Quebec City.  Proportionally, these survive less than all other main types of artillery brought back.  One reason for this was, as large and showy hunks of the Kaiser’s forces, they were especially singled out for scrapping to help with the war effort in the Second World War. Here is a link to WW1 footage of these guns in action. If you ever come across another of these, hulking around somewhere or other, let me know!  UPDATE: Here is the website of Lamb Industries, the company that fabricated light-weight repros of these for the Steven Spielberg movie Warhorse, which featured a couple of the longer-barreled version of this gun – In case you need a decent gate-sentry for your place, but don’t want to deal with those heavy, musty-rusty old guns!

There are about a half dozen of this type left in Canada, (with quite a few having been shipped back originally) but this gun is special. It was captured by the 27th Canadian Infantry Battalion in Farbus wood, near Vimy Ridge on April 9th, 1917. It was mentioned in the unit’s war diary narrative of the Vimy operations. It was likely captured by “A” company, when they rushed the battery led by Major Taunton and Capt. T.B. Lane. As part of the operational planning for Vimy, special training was provided to quickly use captured guns against retreating Germans, to avoid the usual problem of advancing units outpacing their own guns’ ability to provide artillery support. The 6th Canadian Artillery Brigade took over this howitzer and a large supply of shells. Soon after Vimy, they had already fired thousands of rounds at the enemy. It continued to be used by the 21st Howitzer Battery for several months. The gun as it exists does not have original wheels, and has a beautiful Kaiser Wilhelm II cypher and coat of arms on the barrel. The author, having spoken to heritage staff in the community about his research into the howitzer’s origins, hopes that this valuable artifact will get the attention, and interpretation it merits.

This is a nice example of a standard long-barreled field gun, model 1916. Serial no. 15204 is at the Sandycove Veterans Club in Innisfil, and is an important part of the club’s cenotaph, that has just been dedicated in early November, 2013 and will proudly host community Remembrance Day ceremonies. This FK 16 field gun was captured on September 27th, 1918 on the opening day of the Canal du Nord offensive, on the Arras-Cambrai road, south-east of Marquion, by the 4th Canadian Infantry Battalion (Central Ontario). The unit’s war diary notes the capture of six 7.7cm guns and two “H.V. 7.7s”. This is likely one of the latter, H.V. representing High Velocity, from the higher muzzle velocity of these pieces over the older FK 96 guns. The gun was originally allocated to Galt. It was acquired in the early 1980s by one of the club’s owners. The gun’s current location would seem to match better the 4th Battalion’s base of recruitment, Military District no. 2. Correspondence with Major (Ret’d) Edwin Gemmell, the president of the Club, resulted in the discovery of an accurate serial number, which allowed the guns’ provenance to be ascertained from the ledger and the war diaries. The gunner’s shield bears some evidence of shrapnel damage. If only all the war trophy research was so productive and rewarding!

This is one of two similar Krupp naval cannon that were taken off the Kaiser’s older battleships, where they were secondary armament, and installed on heavy field carriages for use on the Western Front.  One is 40 calibres long, the other is 45.  Small details in the layout of the recuperator pistons and the tube layering of the barrels may help determine which is which. They are the heaviest type of cannon brought to Canada from Europe.  When barrel, firing platform and carriage are added up, they total about 9.5 tons.  These guns, being conspicuous captures, were photographed awaiting transfer to England.  These Australian War Memorial photos show guns captured by Canadians, and the original disruptive camoflage schemes that made many First World War canon appear very different from the almost universal black and field grey schemes they bear today.

The two guns, no. 4693 and 4826, along with between 2 and 4 other similar guns, were in Toronto on display on the Canadian National Exhibition grounds in the early 1920s.

The story of how these two mammoth pieces were brought to Vaughan and by whom is featured here. Frustratingly, the numbers of these two don’t exactly match those listed for the naval guns in the several sources I’ve seen. There are very few of these types left in the World, and the 45 caliber version might be completely unique. The Woodbridge site is one of the most beautiful commemorations of the War in Canada.  A stairway ascends up terraced ornamental gardens to first an FK 16 7.7cm field gun, then the visitor follows a path to the memorial tower, which was built in the style of a Scottish watchtower, and originally had a lit beacon at the top.  The naval guns flank the tower on plinths.  One plinth is dated 1928, 4 years after the tower was raised.

Originally, this very handsome sculpture and memorial was accompanied by a light German howitzer.  However, this is listed as having been scrapped for metal during the Second World War.  A photo of this original location can be found here.  In preparation for the Seaway project and the resulting flooding, waterfront sections of Morrisburg were dismantled and this cenotaph was moved to its present location in front of the Justice building.  At some point it was grouped with a set of field guns.  These are both in reasonable condition and have the Kaiser’s cypher remaining on the barrels, the far gun is trained slightly to left and has well-preserved iron sights.  These pieces are listed as having been captured by the 28th Canadian Infantry Battalion, and the 2nd Canadian Mounted Rifles.

Oh, for the days of hyperbolic exhibit text! The sign below this French 75mm model 1897 quick-firing canon goes on to elaborate: “called the 3-inch machine gun, these pieces saved the World.” During the War, two French 75s were freed up from this important duty to be sent in a shipment of gifts from the French Government to Canada, along with an old 8 cm Mountain gun and a whole variety of items. Remarkably (considering the equivalent survival rate of the German guns) both of these guns seem to have survived. One is in evidence near the Junkers Trench Raiding aircraft at the Hamilton War Trophies display in Nov. 1919. One was retained by the public archives for the Ottawa Museum and winds up in the Canadian War Museum, where it is listed as having originally been on the charge of the 65th (French) Battery. The other “soixante-quinze” (with a thank you to Bob Brown for the head’s up) is on display in Harriston, ON (minus wheels). The War Trophies Commission’s war trophies allocation ledger lists this just by its serial no.(3598), leaving the reader, and probably a lot of folks in the community over the years, to believe it is some type of German canon. The model 1897 was a revolutionary piece of artillery, that caused all other powers to scramble to integrate recoil mechanisms onto their cannon. Gone were the days of re-aiming the piece for every shot, and a well-drilled gun crew could fire more than 20 rounds a minute, or as fast as a good infantry soldier could shoot a bolt-action rifle. Here is a clip that shows the speed the gun could be reloaded and fired at and discusses how revolutionary it was. Popular demand dictates that I also mention its popularity was such that it lent its name to a swanky cocktail that came, some how, out of the fog of war (or the fog of drink)! 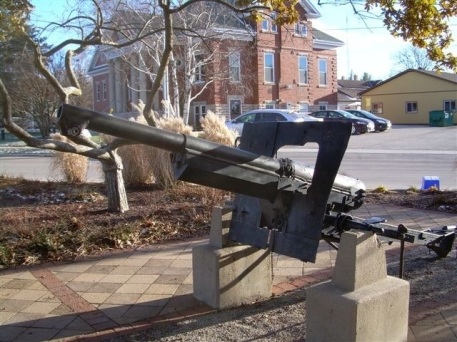 This is the other 75mm model 1897 French canon, on display in Harriston, ON(courtesy of Bob Brown)

2 thoughts on “Types of Artillery on display, and select examples”