Shipsearcher identifications provide the intellectual content of these pages, and are a unique creation. If you wish to make use of the google imagery with our identification and title/legend information, we ask that you credit “warsearcher.com” and link back to the site. The actual satellite imagery remains copyrighted under Google Earth and the imagery providers. Photographs and satellite / aerial imagery are attributed correctly wherever possible. All ship identifications are by the creators of the site, and any errors are our responsibility. We welcome input in the form of comments to the relevant pages to help correct inaccurate identification, or locate other naval vessels. We may accept additional imagery that is provided to us, acknowledging the source.

The IDs of naval vessels depend entirely on visual mapping/imagery loaded in Google Earth, sourced from several different imagery providers (using the Google Earth Pro application freely available for download). This resource, in some instances, goes back long before the age of satellite imagery. Information useful to identification of warships is found on the wiki universe, the multitude of pages for classes of warship and individual units, and general topics such as fleet modernization, class rebuild, naval vessel recognition and “ship spotting” sites, and other information currently proliferating online. Identifications depend on information on where ships were constructed, home-ported, where ships were laid up in reserve status (typically for long periods of time), where ships underwent major rebuilds, which ships had unique upgrades or installations, how ships were converted to other uses on disposal, where ships were dismantled, and where museum ships are or were on display. Occasionally, well-known shipwrecks (in shallows) or derelict vessels are incorporated. Many vessels were easy to locate, some were extraordinarily difficult to find! 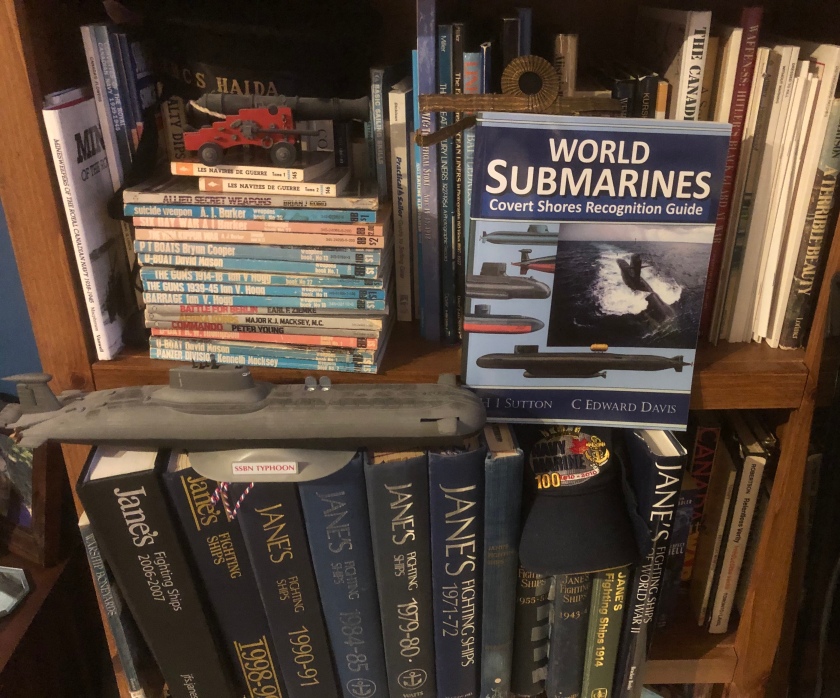 Here is a mostly authentic view of some of the Shipsearcher Identification Section resource center’s titles. Jane’s Fighting Ships is an invaluable resource for ship identification, and helps fill in the gaps for Cold War naval units that survived into the early 2000s.

One printed source of value to the project was Kit and Carolyn Bonner’s illustrated history of USN reserve / inactive fleets Warship Boneyards (MBI Publishing, 2001, 128 pp). The wealth of images in this publication allowed for identification of several inactive US Navy vessels from older satellite captures. Some vessels were identified based on the date of the satellite capture and specific vessels being the last of a particular class at a inactive ship facility or in general existence. The plans, descriptions, and photos found in the 1898 to current editions of Jane’s Fighting Ships are a key source of information. Indeed, the breadth of coverage and general layout of Jane’s has long been an inspiration to warsearcher staff. On the site wwiiafterwwii, there is also a nice two-parter [links to Parts 1 and 2] on the history of USN inactive warships that also has great context and visuals. We also have relied on Russianships.info and found the descriptions, plans, and dimensions to be of great use.

Warsearcher staff have found the best means of identifying warships in satellite (and aerial) imagery is by cross-referencing information from the above sources with visual indicators such as: Deck numbers and codes, including pennant numbers; total length of vessel and (occasionally) width; overall silhouette/outline of hull-forms and flight/helicopter landing decks; large deck structures/installations such as superstructures, hangers, derrick cranes, turrets, gun-houses, mountings, gun shields, torpedo/missile/rocket launchers including vertical launching systems, funnel/stack/mast/”mack” layout, towed sonar arrays and mine-sweeping equipment. ASROC 8-cell “pepperbox” launchers may be one of the most distinctive pieces of equipment ever fitted to US and other Allied naval vessels, while older classes of Soviet warship have enormous “hot dog pack” launchers (for SS-N-14 Silex SSM/ASW missiles).

Identifications of docked submarines are more difficult for a variety of reasons. Length and breadth of the visible hull, and estimations of submerged surfaces, such as the screws, need to be factored in along with sail or fin location, location of diving planes and rudders, and other projections, such as bow sonar domes, towed sonar housings, and obvious missile hatches. The creators of this site have usually built the pages from the largest units to the smallest. In practice, depending on the region that the satellite imagery is from, it becomes difficult or impossible to ID patrol boats or other smaller vessels.

Sources of photographic imagery which appear on these pages were drawn from the National Archives and Records Administration (NARA), the Imperial War Museums (IWM), the Department of Defense’s Defense Visual Information Distribution Service (DVIDS) online database, the (US) Naval History and Heritage Command, Library and Archives Canada (LAC), the Canadian Department of National Defence’s Combat Camera site, the Australian War Memorial, and many are from Wikimedia Commons. Use of images for other than non-commercial / research purposes would not be permissible without contacting the above repositories, and I encourage visitors to this site to consult the above pages for information on use and licensing of their collections to ensure correct attribution.