With Spring comes the budding out of blossoms, and bright hues to succeed the drabness of a long Ottawa winter. At the Canadian Aviation and Space Museum, the German First World War Fokker DVII biplane is wearing a new motley coat of distinctive camouflage.

To revisit some relevant posts, the only other complete Fokker DVII in Canada is at the Brome County Historical Society in Knowlton QC. That aircraft is in 4-colour lozenge camo, (called “Knowlton” pattern or Vierfarbiger), while this Fokker wears a 5-colour (“Canberra” or Fünffarbiger) scheme. The CASM now has the AEG German bomber in night lozenge camouflage, this Fokker in daytime lozenge, and the Junkers J1 in junky lozenge!

(editor’s note – the contributing author of this piece thought a lozenge camo joke was appropriate here, despite the editorial board’s recommendation otherwise)

This sample of First World War Night Lozenge Camouflage is from the original fabric of the AEG bomber in the collection of the Canada Aviation and Space Museum. This photograph was of the more vivid underside of the fabric, while the exterior was coated in a reflective coating. (author’s photo)

Recently, I took some photos of original First World War German lozenge camouflage, the original fabric “skin” of a war trophy plane I have already featured on this site. Hopefully, the photographs will help a friend complete an impressive scale model of the CASM’s German AEG bomber. The original “night lozenge” pattern fabric has been preserved by the staff of the Canada Aviation and Space Museum at a nearby facility. In contrast, below is an elevated view of the original Fokker DVII fighter in the Brome County Historical Society’s museum in Knowlton, Quebec (more about this unique aircraft here). The pastel-like day lozenge camouflage on this aircraft is so significant to understanding First World War German aircraft colours, that today, this 4-colour pattern is known as “Knowlton lozenge.” I don’t pretend to be a specialist in aircraft, but I do know that the trophy aircraft, like the captured artillery, today reveal the strength of First World War artifacts in Canada.

The AEG G IV bomber was a twin-engine German biplane medium bomber. An improvement on earlier AEG G types, It entered service in late 1916 and served, mostly as a tactical and night bomber, for the rest of the war. The aircraft could carry almost 900 lbs. of bombs and had two parabellum machine gun positions for self-defence, with the rear-gunner able to crouch and also fire downward through a trap-door to defend against threats from below. Like the Junkers, it made revolutionary use of an all-metal skeleton. Today, the AEG in the Canada Aviation and Space Museum’s collection is the only intact twin-engine German First World War bomber in existence. Aircraft no. 574/18 was brought back as a war trophy, and early war trophies exhibit photos show that it did not have engines, and propellers were simply hung in about the right spot with nothing behind them! Since I already was featuring two 1920s era photos of this aircraft in various states, and also found an official photo of a similar type, outside of the Namur zeppelin sheds after the Armistice, including this was a must! In the interwar era it can be seen in pieces along the side wall of the Public Archives’ War Trophies Annex. Eventually, less powerful engines were acquired to fill the voids. This aircraft also is the only survivor showing the distinctive night-lozenge camouflage paint scheme. 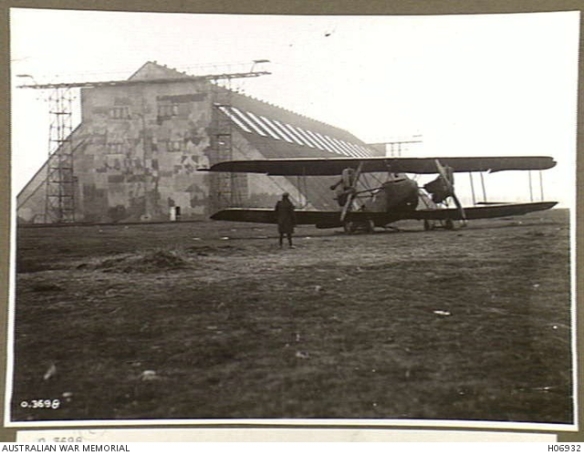