A brief history and satellite imagery exploration of what shipsearcher staff like to call the USS Potemkin Maru!

Carrier of dreams or carrier of nightmares? In the case of the Islamic Republic of Iran’s fake aircraft carrier, that depends on your perspective. It might be as simple as which side of the Strait of Hormuz you are looking at it from.

Building an aircraft carrier is no easy task, and few countries in the World are able to marshal the necessary resources, technologies, and shipbuilding capacity to do this. Since the end of World War Two, the US Navy has commissioned about 30 large carriers, each class of which surpassed the last in terms of size and capability.  The current Nimitz-class supercarriers routinely patrol the waters of the Persian Gulf, and transit the Strait miles away from the Iranian coastline.

As one response to what Iran sees as constant provocations, it built its own unique carrier: a massive fake target ship. A floating target could be as innocuous as a floating barge or a platform with some markings, but this 670-foot long mock-up, completed in 2014, looks like somebody’s idea of a US supercarrier! Unlike the training aids or amusement park attractions we feature on other pages, such as the People’s Liberation Army Navy (China), this fake carrier is unique: It can be towed out from its home-port, Bandar Abbas, and attacked to test the strike capabilities of the surface units of the Iranian Navy, missile technologies, and the swarm tactics of the fast attack boats of the Revolutionary Guard’s maritime component, in a massive display of carefully staged pyrotechnics.

The thing about the Iranian military displays is that they are not staged in some out-of-the-way backwaters. On one side of the Straits are the United Arab Emirates, on the other is Iran, with Bandar Abbas the major Iranian naval port in the area. Loaded super-tankers transit this tight gauntlet, lined up like a vast convoy. Annually, over 20% of the World’s petroleum pass by here, on the way to facilities across the World – a massive choke-point for oil. During the Iran-Iraq War the supply of oil through the straits was threatened during the so-called “Tanker War.” In 1988, the US Navy’s Operation Praying Mantis struck Iranian targets here, and sank several warships, in part for retaliation against Iranian mine-laying activities. Since 2015, the Iranians have twice pushed the giant target out into the Strait, to stage large attacks against it.

What follows is a satellite imagery survey of the unusual career of what, for want of a better name, Shipsearcher Identification Staff (SIS) dubbed the (fake) USS Potemkin Maru. The staff naval historian assigned to write this post is not certain if those twinkie-eating wiz-kids at SIS came up with this name as a reference to fake Russian villages, Japanese merchant ships, or the simulation that James T. Kirk cheated in Star Trek…or all of these. The SIS hasn’t yet set up a page for the Iranian Navy, so, for now, it makes an “honourable mention” in the USN currently-serving Aircraft Carriers page.

We made the mistake of writing the Potemkin Maru off after it was “battle-damaged” the first time, on 25 February 2015. It lay abandoned outside of the Bandar Abbas restricted naval port breakwaters. But this fake carrier is nothing if not resilient. She was brought back into the port in August, 2018, and was repaired, only to be attacked again. Was there some type of mid-life upgrades? The only visual difference we could see was that the leading edges of the flight deck were slightly modified to be less “curvy.” This made the mock carrier appear less silly.

For the 28 July 2020 attacks, an assault team rappelled down rope from a hovering helicopter. We imagine this would be useful for training on landing a team on a merchant ship like a tanker, not a carrier surrounded by its screen of escorts, and air complement brimming with attack aircraft. Next up, a missile attack was staged: land-based anti-ship missiles and helicopter-fired rockets damaged the target. In the days after the attacks, press reports have not yet revealed what the ultimate fate of the Potemkin Maru is, with some indicating the carrier was “blown up,” and others claiming it was slightly damaged in an underwhelming display of military incapability. Will there be another rebirth of the great simulated ship? In his eloquent commentary on the use despots can make of propaganda victories vs. the actual reality, we can’t improve on poet Robert Graves’ closing lines in The Persian Version: “what repute the Persian monarch and the Persian nation won by this salutary demonstration: Despite a strong defence and adverse weather, all arms combined magnificently together.”

-2020/10/13 Update! Recently released imagery dating from this summer now shows the fake carrier pulled to the side of the breakwater, in the most wrecked condition it has yet looked. 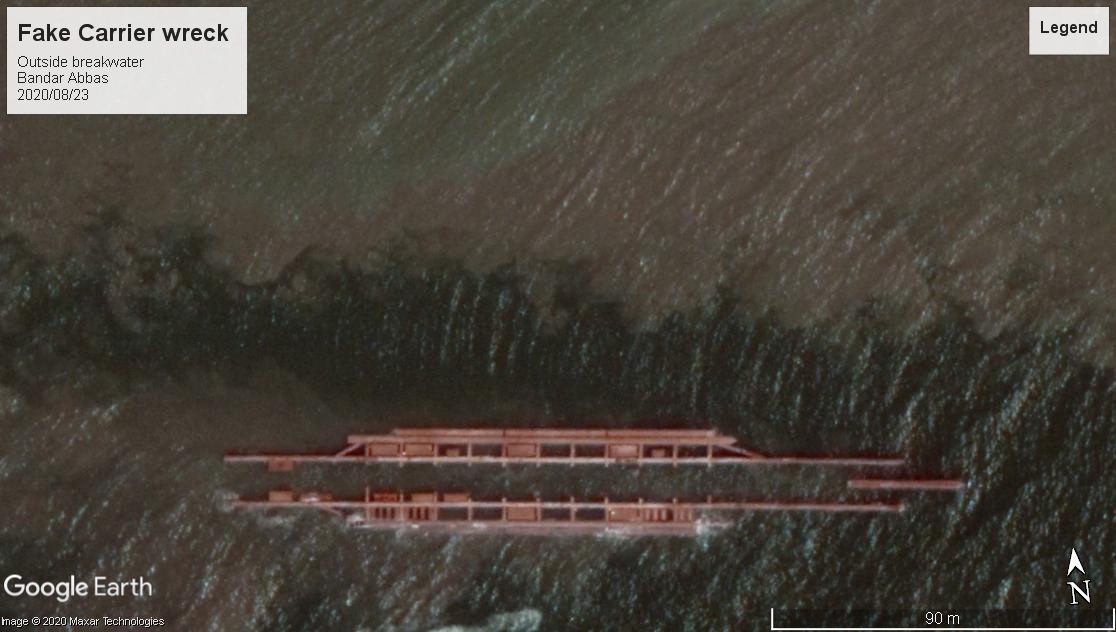 -2020/08/03 Update! More is now known (one day later) on the fate of the fake Iranian Carrier after the 28th of July exercises. It appears in recent imagery waterlogged, capsized onto its starboard side just outside of Bandar Abbas. Fake target carrier to real danger to navigation: