This post will briefly explore the career of the second Bounty replica. Two previous posts explored the history of the original HMAV Bounty of 1787, and the first replica Bounty of 1960.

The second replica of HM Armed Vessel Bounty has a colourful history. This little ship was built in New Zealand during 1978-1979 for a film project that didn’t initially materialize. Filmmaker David Lean had planned a massive two-movie project about both the mutiny and the aftermath. This ambitious project aimed at a more accurate depiction of the events, and part of that involved a new replica.

This new ship had wood cladding over a steel hull and frames. Modern construction methods meant that she could be built at a non-specialized shipyard in New Zealand –Whangarei Engineering Company. She would be built to updated safety standards and would be easier to maintain than a wooden ship. Compared to the traditionally-built 1960 replica, this Bounty was actually a more authentic reconstruction. The overall dimensions were closer to the diminutive size of the 1787 ship, with a deck 98′ long and an overall sparred length around 135′. The hull was 23’ wide. She was 247 tons burthen, which was only slightly larger than the original. Ornamentation at the bows and stern was also less elaborate. Like the other replica, she was fitted with engines. In this case two eight cylinder Kelvin diesel engines gave her the independent propulsion to keep on schedule getting to and from filming locations.

This Bounty, sometimes called Bounty III, can be distinguished from the 1960 replica by her natural wood sides, with a blue band above deck-level near the stern. The deck furniture and inboard details were also left as natural wood. Materials for the construction were sourced from all over the British Commonwealth, including rigging and blocks from England, flax sails from Scotland, and masts made of Canadian Douglas Fir. The steel for the hull came from Australia and the wood on the hull sides was locally-sourced Iroko, a durable wood that gradually darkens with age.

With a steel hull, she had no need for coppering below the waterline – copper sheets protect wood hulls from boring worms (actually a tiny clam) and inhibit marine growth. A copper paint simulated the look. Whereas the 1960 replica was originally rigged with a full 3-masted ship rig, this smaller vessel was set up as a bark, which, in the 18th Century usage, means it had no mizzen topgallant yard or sail on the aft (mizzen) mast. To put it lubberly-like, it was missing the top square sail from the back mast! The building, and the uncertain film status is well-described in the 1981 New Zealand documentary A Fated Ship, available at the nzonscreen.com website.

After years of on-again-off-again discussions about the films, and enquiries about selling her, the ship did finally get her chance to serve in her intended role, in the 1983 Dino De Laurentiis-produced Hollywood film “The Bounty.” It was an adaptation of the original project. This blockbuster starred Anthony Hopkins as Lt. Bligh and Mel Gibson as Fletcher Christian. Following a brief lay-up, she was refitted in Vancouver, Canada, and attended Expo 86 there. A highlight was her participation in the 1988 First Fleet Reenactment. After a Royal Inspection by Queen Elizabeth, Bounty and six other ships set sail from Portsmouth, UK, to retrace the route that the first fleet of ships bearing colonists had taken, two centuries before, to Australia.

Years later, Bounty was based out of Darling Harbour, Sydney, Australia, and docked near the National Maritime Museum. This hardy little replica took visitors on tourist excursions. Bounty could be chartered for events, and continued appearing in various film and television projects. She was often located within sight of the very similar replica of the HM Bark Endeavour (1993). Both vessels, small bark-rigged converted British merchant ships from the same general period, have very similar paint schemes. The similarities have resulted in several archives and wikimedia contributors frequently confusing these ships. 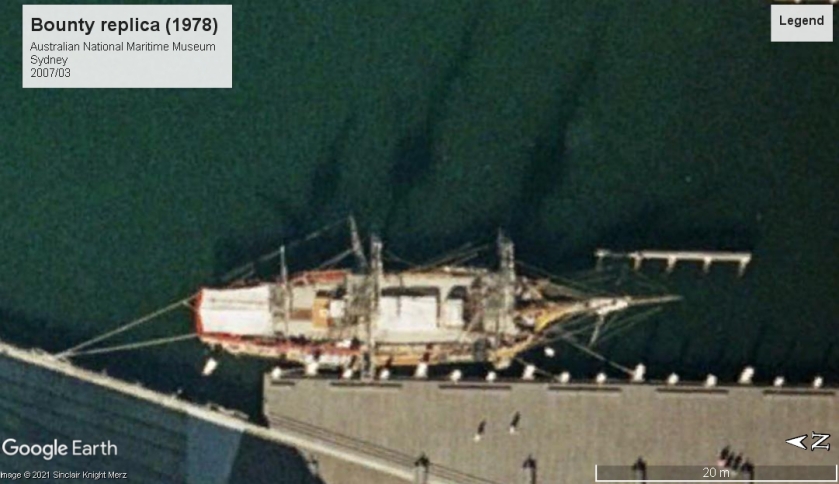 Bounty has a flush deck and a more elaborate bow, with headrails and the figurehead. At the stern, Bounty has projecting lights at the quarter badge (“bay windows”).  Endeavour is a bigger, tubbier, higher-set vessel with a stern raised far enough out of the water that she has room for stern-chaser gunports beneath the stern lights. During Cook’s famous voyages of exploration, the British Admiralty were not yet consistently coppering the hulls of their warships, so the Endeavour replica also has a distinctive band of white anti-fouling paint just visible around the waterline.

In 2007 Bounty was sold to HKR International, and wound up as a mostly stationary attraction at the Discovery Bay resort in Hong Kong. There, she was also called “Chi Ming”, a rough Chinese equivalent to Bounty. Her new port of registry appeared just above the stern lights. Five years after the 2012 sinking of the other Bounty replica, this ship, reportedly in poor condition, was decommissioned and sold to a Thai firm.

Since late 2017 she has been berthed at a dock South of Bangkok.* The mizzen mast has been removed due to rot, and the ship is languishing. We hope this will not be the end for this Bounty. This is not the end of our Bounty posts. We are working on at least one more, and it may surprise readers!

*When we began these Bounty posts, the information about Bounty’s current location was found on this replica’s facebook appreciation group. Since then, wikipedia has been updated with this information. Here is a view of her current berth.